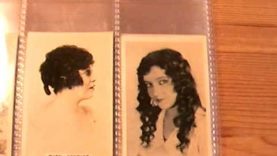 Was your grandma a movie star?

Even film directors in the 1920s knew that showing beautiful women running around in bikinis would attract a bigger audience. Many studios had their own troupes of seductive females, including Mack Sennett’s Bathing Beauties and the Christie Film Companies’ Comedy Girls.

Mack Sennett, of course, was a famous silent film director who founded Keystone Studios. He was one of the major innovators of slapstick comedy and worked with legendary stars such as Charlie Chaplin, Mable Normand and Roscoe Arbuckle (aka Fatty Arbuckle).

The cigarette cards featured in this video are from the following series:

Royalty free music at beginning of video is by Kevin Macleod