The Pride Of St. Louis

MADNESS OF THE HEART 1949 Margaret Lockwood

Phone Call From A Stranger–Bette Davis 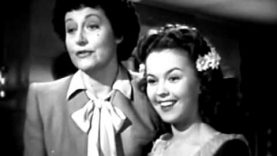 End of the movie: http://www.youtube.com/watch?v=1_4LpYjD4F0&feature=youtu.be

Kiss and Tell is a 1945 American comedy film starring then 17 year old Shirley Temple as Corliss Archer. Two teenaged girls cause their respective parents cause for concern when they start to become interested in boys. The parents’ bickering about who is the worst influence causes more problems than it solves.
The movie was based on the Broadway play Kiss and Tell, which was based on the Corliss Archer short stories. The stories, play and movie were all written by F. Hugh Herbert. A sequel film, A Kiss for Corliss, was released in 1949 and also starred Temple, but was not written by Herbert.

If you would like to purchase this movie, along with all the other movies Shirley made as a teenager in a set, here is a link to my listings.

At the end of the movie, where it cuts off, there are a few more lines.

Corliss: “Well Mom, I couldn’t tell – and I think we put on a pretty good act!”
Mother: “It was much too realistic. But I should have known Dexter couldn’t do a thing like that.”
Dexter: “Holy cow!” (in an offended way)