As Time Goes By- George Sanders

The Shop Around the Corner Radio Part 1of 2: Van Johnson & Phyllis Thaxter (1945) 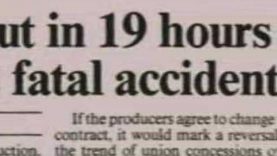 Haskell Wexler joined us in studio to discuss movies, politics, and social justice beyond Hollywood. Detailing some of the history of his sparkling and muck-raking career, from the Chicago 1968 Democratic Convention riots to the current Occupy movement, Mr. Wexler illuminated the necessity to bring truth to the public through film and journalism, in this uncensored Media Mayhem interview, hosted by Allison Hope Weiner.

GUEST BIO:
Haskell Wexler is one of the most important cinematographers working in the film industry today. His work has spanned six decades. He shot his first film in 1947. He’s photographed a wide range of films that have earned him five Academy Award nominations and two Oscars for Best Cinematography. He won Academy Awards for his work on Mike Nichols’ WHO’S AFRAID OF VIRGINIA WOOLF and Hal Ashby’s BOUND FOR GLORY. Wexler is also known for his work on ONE FLEW OVER THE CUCKOO’S NEST, IN THE HEAT OF THE NIGHT and THE THOMAS CROWN AFFAIR to name just a few. He’s also done television work, earning an Emmy nod for the lensing of the HBO movie 61*, directed by Billy Crystal.
As a director, Wexler made over fifty documentaries including, MEDIUM COOL, a groundbreaking film shot during the Democratic convention in Chicago and LATINO in Nicaragua which received a special honor at Cannes Film Festival. He’s also directed the documentaries THE BUS, BUS II and BUS RIDERS UNION; INTRODUCTION TO THE ENEMY, shot in Vietnam with Jane Fonda; INTERVIEWS WITH MY LAI VETERANS, which also won an Academy Award, NO NUKES with Barbara Kopple, and TARGET NICARAGUA: INSIDE A SECRET WAR.

EPISODE BREAKDOWN:
00:00 Welcoming Haskell Wexler to Media Mayhem.
03:01 Documentary film-makers picking up the slack for the media?
04:03 “Medium Cool” and shooting in sequence with the 1968 police riots in Chicago.
06:14 Journalist as observer and active participant.
07:47 Documenting war: Getting the shot while trying to help.
09:17 “Medium Cool” footage–preparing for a riot.
10:02 Tipped off for the police riot in 1968.
11:24 Seeing through political artifice.
14:00 Are journalists similar to filmmakers?
17:38 Does media just give people what they want?
19:35 What inspired you to go to Occupy?
21:05 The evolution of Occupy coverage and understanding.
24:01 Mr. Wexler’s Occupy LA footage.
27:20 “After they go after you, then you win.” Gandhi
30:40 Reaching the power through new local technology.
31:53 The new media and government-different from how it used to be.
33:05 9/11 and it’s impact.
35:06 Individual responsibility versus the corporate media’s agenda.
37:55 Applying an agenda to filmmaking.
39:10 “Who needs sleep?” and the Hollywood labor struggle.
42:21 Are workers complacent?
45:05 Entertainment business and the freedom to air complaints and ask questions.
45:58 Traveling to Vietnam with Jane Fonda (and paying consequences).
48:40 Parallels between Vietnam and Iraq.
50:30 Were journalists playing the right role in the lead up to war?
53:05 MAYHEM ROUND
55:10 Is there appropriate torture?
58:21 Is the torture debate more open now?
01:01:10 “We have to ask the questions,”–clarifying our language and the duty of the people.
01:03:54 A take on modern China.
01:04:53 Our government–some depressing news.
01:05:47 Is the media designed to distract?