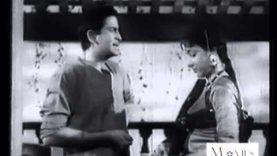 Devdas is a young man from a wealthy Bengali Brahmin family in India in the early 1900s. Paro alias Parvati is a young woman from a middle class Bengali family also a Brahmin, but belonging to a slightly lower status in terms of caste, affluence and status. The two families lived in a village, and Devdas and Paro were childhood friends.

Devdas goes away for some years to live and study in a boarding school in the city of Calcutta (now Kolkata). When, after finishing school, Devdas (Dilip Kumar) returns to his village, Paro (Suchitra Sen) looks forward to their childhood love blossoming into their lifelong journey together in marriage. Of course, according to the prevailing social custom, Paro’s parents would have to approach Devdas’ parents and propose marriage of Paro to Devdas as Paro longed for.

When Paro’s grandmother (Sarita Devi) makes the proposal to Devdas’ mother (Pratima Devi), the latter rejects her. To demonstrate his own social status, Paro’s father, Nilkant (Shivraj) then finds an even richer husband for Paro.

When Paro learns of her planned marriage, she stealthily meets Devdas at night, risking her honor desperately believing that Devdas will quickly accept her hand in marriage. Devdas meekly seeks his parents’ permission to marry Paro, but Devdas’ family was against him.

In a weak-minded state, Devdas then flees to Calcutta, and from there, he writes a letter to Paro, saying that they were only friends and there was no love between them. But soon realizing his mistake he goes back to village and tells Paro that he is ready to do anything needed to save their love.

By now, Paro’s marriage plans are in an advanced stage, and she declines going back to Devdas and chides him for his cowardice and vacillation. Parvati’s marriage is finalized with a wealthy zamindar and widower (Moni Chatterjee) with children older than his young second wife.

In Calcutta, Devdas’ carousing friend, Chunni Babu (Motilal), introduces him to a courtesan named Chandramukhi (Vyjayanthimala). Devdas takes to heavy drinking at Chandramukhi’s place, but the courtesan falls in love with him, and looks after him. His health deteriorates because of a combination of excessive drinking and despair of life—a drawn-out form of suicide. Within him, he frequently compares Paro and Chandramukhi, remaining ambivalent as to whom he really loves.

Sensing his fast-approaching death, Devdas returns to meet Paro to fulfill a vow that he would return to her before he dies. Devdas vows to do so. He dies at her doorstep on a dark, cold night. On hearing of the death of Devdas, Paro runs towards the door, disregarding “purdah”, but her family members prevent her from stepping out of the door.

The movie powerfully depicts the prevailing social customs in Bengal in the early 1900s, which are largely responsible for preventing the happy ending of a genuine love story.