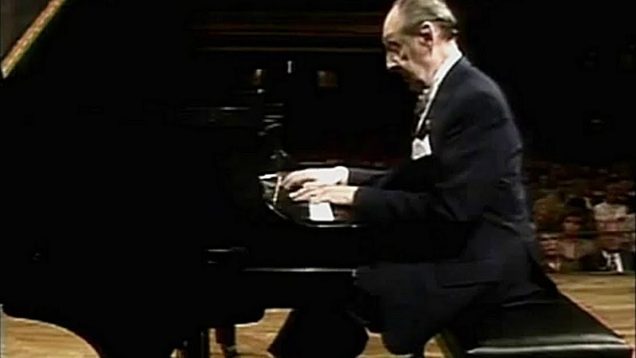 When Schumann wrote Kinderszenen (Scenes from Childhood), he was deeply in love with Clara Wieck, soon to become his wife over the objections of her overbearing father. The composer worked at a feverish pace, composing these pieces in just several days. Actually, he wrote about thirty small pieces, but trimmed them to the thirteen that comprise the set. They are fairly simple in terms of execution, and, of course, their subject matter deals with the world of children. Schumann, however, pointed out that they were not intended for children.

The seventh item here, “Träumerei” (Dreaming), is the most popular in the set. It is a depiction of childhood innocence, vulnerability and gentleness. Many pianists have interpreted this piece in a sentimental, almost saccharine way, while others (Horowitz notably) have insisted on a more objective approach. The main theme is sweetly innocent and sentimental, clearly representing the adult Schumann’s fond view of aspects of his own childhood. The melody is unforgettable, the harmonies simple, but distinctive, and the overall mood dreamy and soothing. Of the many themes associated with children — that in Brahms’ Lullaby, several in Prokofiev’s Peter and the Wolf — the “Träumerei” melody is among the most memorable. The whole piece lasts under three minutes, but is the longest in the Kinderszenen set.

Most pianists who play Kinderszenen rarely excerpt it, but when an individual piece from it is played by them in concert, “Träumerei” is usually their choice. Horowitz was known to play it as an encore on several occasions.

From spirited games to sleeping and dreaming, Kinderszenen captures the joys and sorrows of childhood in a series of musical snapshots. Schumann described the titles as “nothing more than delicate hints for execution and interpretation”. The Kinderszenen are a touching tribute to the eternal, universal memories and feelings of childhood from a nostalgic adult perspective; unlike a number of Schumann’s collections of piano character pieces (e.g.Album for the Young,Op.68), the Kinderszenen are not intended to be played by children. Schumann claimed that the picturesque titles attached to the pieces were added as an afterthought in order to provide subtle suggestions to the player, a model Debussy followed decades later in his Preludes. Almost all of the Kinderszenen are miniature ternary (ABA) forms.